So what makes this news more promising than other stories emanating from Syria? Last night, Ashtar on An Hour with an Angel said that Bashar al-Assad was now in containment (he was not some time ago when AAM was interviewed).

Ashtar said that all first-level Illuminati were in containment now and the second tier would be by the end of the week – which would have profound political, social and financial impacts. Indeed rumblings of financial impacts are already being heard behind the scenes. (We are researching and welcome tips.)

Speaking in the Jordanian capital, Amman, he said the regime controlled no more than 30% of Syrian territory.

He called on the opposition abroad to unite and on the Syrian army to stand alongside its people.

UN humanitarian chief Valerie Amos is in Syria to assess ways to increase the flow of emergency aid there.

Mr Hijab told a news conference he was joining the rebel side and urged other political and military leaders to break away from President Bashar al-Assad’s regime.

“I urge the army to follow the example of Egypt’s and Tunisia’s armies – take the side of people,” he added.

This is the first time Mr Hijab has spoken publicly since fleeing to Jordan with his family last week. 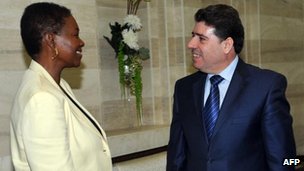 The highest-ranking political figure to defect from the Assad regime, he explained how he had decided to leave Syria on 5 August before spending three days travelling to Jordan with the help of the Free Syrian Army (FSA).

“Syria is full of officials and military leaders who are awaiting the right moment to join the revolt,” he asserted.

Damascus is also facing the prospect of increased diplomatic isolation, as the Organisation of Islamic Co-operation (OIC) meets in Saudi Arabia to consider a recommendation from foreign ministers to suspend Syria from the 57-member group.

Iran is resisting the proposal. “We have to look for other ways, means and mechanisms for resolving conflicts and crises,” Foreign Minister Ali Akbar Salehi said.

President Bashar al-Assad has sent an aide, Buthaina Shaaban, to Beijing for talks on the crisis with Chinese officials.

A Chinese foreign ministry spokesman said it was also considering an invitation to members of the Syrian opposition.

Beijing has opposed recent UN resolutions on Syria, but backs a ceasefire between the warring parties as well as political dialogue.

Baroness Amos, the UN under-secretary general and emergency relief co-ordinator, went to Damascus on Tuesday with the aim of discussing ways of “urgently scaling up relief efforts and reducing the suffering of civilians caught up in the fighting”, the UN said.

She was expected to ask for more foreign aid workers to be given visas, as the Syrian Arab Red Crescent struggles to distribute food to those who need it. 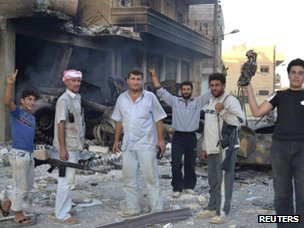 Human rights and opposition activists say at least 21,000 people have been killed since March 2011
Two million people are now estimated to have been affected by the crisis and over one million have been internally displaced. More than 140,000 people have fled the violence and crossed into Lebanon, Jordan, Turkey and Iraq.

Baroness Amos is due to leave Damascus for Lebanon to meet families who have fled Syria. She will discuss with the government in Beirut as well as humanitarian agencies how best to support the refugees.

Violence has spread in recent weeks to Syria’s two biggest cities, Damascus and Aleppo. On Tuesday, activists in Aleppo said the army had shelled several rebel-held areas including Saif al-Dawla and Salah al-Din.

State news agency Sana reported that a number of “terrorists” had been killed or wounded in several areas of the city.

In Damascus, people were reportedly fleeing the central district of Qabun, fearing a military offensive as security forces raided two other districts.

The rebels have themselves come in for increasing criticism because of their apparent mistreatment of prisoners in and around Aleppo.

A day after videos emerged of one man having his throat cut and the bodies of others being thrown off a roof, the FSA has spoken out against what it terms “executions”.

“You should be aware that carrying out execution operations in a qualitative and haphazard way against the shabiha (pro-government militia) and the regime’s cronies is not permitted religiously or lawfully,” a spokesman said.

Syrian human rights and opposition activists say at least 21,000 people have been killed since pro-democracy protests erupted in Syria in March 2011.