(the picture of the probably not elected but self-pro-claimed president Enrique Pena Nieto.)

Ignored in the most  mainstream media are the huge protests in the streets of Mexico. The people are robbed again from an elected president.

The election campaign was full of protests and biased media attention for PRI ‘s presidential candidate Pena Nieto.  The “President” Pena Nieto proclaimed himself winner before the election results where final.  The voter fraud and buying votes have been not really researched yet, but the claims and evidence becomes even clearer.  After massive protests and statements of fraud there was within one day a partial re-count. The irregularities were pronounced off the table  after one day again the Pena Nieto proclaiming he was the one.  This seems to be defying the power of the Mexican people.  Whilst the real voting results and re-count can only be official after 6 september 2012 it is strange  again that the re-count in full is not completed and the president proclaimed twice.

The streets have seen masses of students protesting against this undemocratic election and behaviour. It becomes evident that issues of self-proclaimed leaders and politicians taken power without honouring their constitution and people is a recurring problem. Vote rigging and buying, media manipulation it is all to see even in so-called bastions of “democracy”. Therefore watch Mexico! 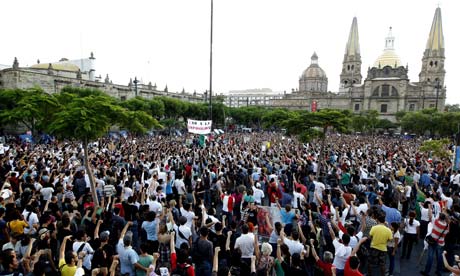