This is something that only few people know and I struggle with
every single day.

The reason I wanted to speak up and out about this was due to
the cobra report that I just read. I would like to speak on behalf of those of
us who do not subscribe to the Rockefeller Rothschild agenda.

Now, I always knew that there was an abundance of shady things
going on here… but what I read tonight just made me angry. I try very, very
hard to let these things slip past me.

Observe the negativity, understand that it has its place… and
try to appreciate and thank these lower activities for teaching me how NOT to
be.

However, what many people do not realize is that there are
people like myself who never even knew that they were a part of this family.
After being stalked and harassed and persuaded to initiate into their factions
throughout my entire life, but never being told the whole truth, I went on my
own journey.

I got a DNA test a little over a year ago and what I found led
me down a rabbit hole of Genealogy and History that I never saw coming. All
that I knew of my family’s history was our Native American side, which I was
quite proud of… But I never went much further past this. There were also many
dead end’s and gaping holes in my family tree…

But the Virgo in me… well, we like to leave no stone unturned.
Thanks to the internet and ebay. I was able to fill in the gaps of many missing pieces. They may have been able to control most of the books and other publications over the past few decades, but I started to find bibles from the 1700’s and History books and Theosophical texts that just showed up in my mail box.

Everything they tried to hide… I uncovered.

But where did the cover-up begin?

There are still many things unanswered… but it looks to me
like they didn’t like the mixture of Native American Blood being entered into
our family line.

My 7th Grandmother, Nanye Hi Fivekiller was known as the Ghiagu
or “Beloved Woman” of the Cherokee and was literally one of the last
women who was allowed power. I discovered this when I realized that many people
knew of her as Nancy Ward… yes, related to most of the Wards you know of and
also related to most of the Starr’s you have read about, who also married into
the line.

You see Nancy wanted peace. But this integration only happened
after her husband, a Native man was killed in front of her…

The combination of loom weaving and dairy farming helped transform
Cherokee society from a communal agricultural society into a society very
similar to that of their European-American neighbors, with family plots and the
need for ever-more labor.

Nanyehi became a de facto ambassador between the Cherokee and the
whites. She learned the art of diplomacy from her maternal uncle, the
influential chief Attakullakulla (“Little Carpenter”). In 1781, when
the Cherokee met with an American delegation led by John Sevier to discuss American
settlements along the Little Pigeon River, Nancy expressed surprise
that there were no women negotiators among the Americans. Sevier was equally
appalled that such important work should be given to a woman. Nancy told him,

DO NOT HOLD ANGER IN YOUR HEARTS. OBSERVE IT… AND THEN LET IT
GO.

I will end this blog with an uplifting story about Nancy, this makes
me see that I am truly of her spirit. I was always called the Beloved One or
Beloved Rose (as I rose again from the heavens and earth, or the Cherokee rose)
but never knew its significance until now. Not to mention the fact that she
seemed to have tattoos all over her arms too 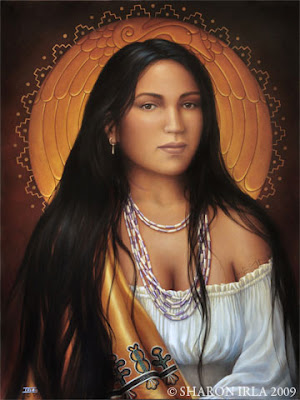 Thank you Nanye… I will carry on your legacy…

“On July 5, 1807, the Moravian mission school at Spring
Place, Georgia, in the Cherokee Nation, was visited by three elderly women,
including a very distinguished lady who had been a widow of fifty years and
almost one hundred years old. She was described as “an unusually sensible
person, honored and loved by both brown and white people.” “This old
woman, named Chiconehla, is supposed to have been in a war against an enemy
nation and was wounded numerous times…Her left arm is decorated with some
designs, which she said were fashionable during her youth….” Chiconehla
stayed for two days, entertained by the students and discussing theology with
the missionaries with the aid of translating by her distant relative, Mrs.
James Vann (Margaret Scott). The circumstances of this high status woman leave
little doubt that this Cherokee named Chiconehla was identical to the person known
as Nancy Ward.[3

On the day she died in 1822, witnesses saw a white
light rise from her body. It took the form of a wolf and then a swan. It
fluttered about and then flew off in the direction of her beloved town of
Chota. She was the last woman to receive the title of Beloved Woman until
the late 20th century. 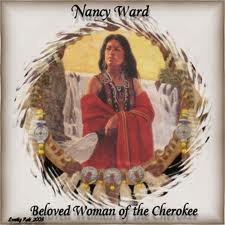 I stand firm in faith and LOVE and believe in PEACE.